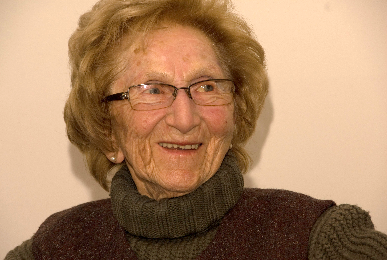 Hedi Fried is a writer and psychologist dedicated to spreading the message of the importance of democracy to combat xenophobia. She uses her own experiences as a Holocaust survivor to address these issues. She was born in 1924 in the town of Sighet in Hungary (now Romania), and lives since 1945 in Stockholm, Sweden.

Manager of Nissen-Preminger AB, importing medical supplies 1962-1972. General Manager of American Company Becton & Dickinson 1972-1977. From 1984 Director of Café 84, a Psychosocial Day Care Center for Survivors. Dialogue Seminars between parents and children. Holocaust Lecturer, advisor to the Government. From 2001 engaged in teaching the class Facing History and Ourselves: What do we learn from Auschwitz? at the Stockholm Teacher Educational Institute.

Gives lectures about her experiences during the Holocaust to school children and general public in the whole country. This within the scope of Forum för levande historia. Uses the method "Facing History and Ourselves". Founded The Michael A. Fried Foundation 2001, which awards scholarships to teachers who distinguing themselves in teaching about xenophobia.